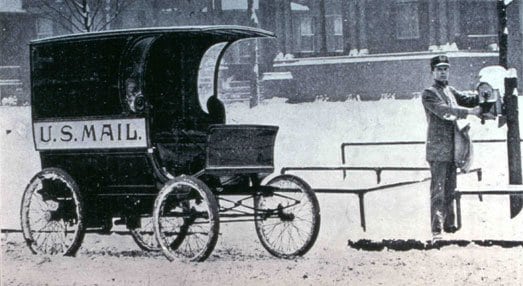 In a time when bills are paid online, and messages are sent electronically it may seem easy to overlook the postal workers that help the country function on a daily basis. If you are like me, shopping online is a regular occurrence and the United States Post Office is a huge part of making that possible. Luckily, there is a day set aside specifically for thanking a postal worker for all that they do. February 4th has long been known as “National Thank a Mail Carrier” day. You may not be familiar with the strong role that that USPS has played over the years, but this is one institution that is intertwined with the growth and advancement of our country.

Mail That Helped Spark a Revolution When you hear the famous phrase “no taxation without representation”, you probably don’t think about the post office. This phrase that became the slogan for the Revolutionary War has ties back to the postal service being run in the early American colonies. Prior to the American Revolution, Benjamin Franklin and William Goddard acted as postmasters over the “Crown Post” for the American Colonies. This postal service began to have mandatory taxes issued by the Crown, which caused colonists to resent the Crown Post, something that contributed to the start of the American Revolution.

Dating Back to Benjamin Franklin

The Cost of Sending a Letter

There were no stamps when the post office first embarked on delivering mail across the country. “Stampless Letters” were sent often with the payment due upon delivery. In 1847, the first official U.S. postal stamps were created. While today you can send a letter via First Class mail with a stamp that costs $0.50 when stamps were first introduced they were sold for $0.05 and $0.10. This may seem like a bit of a price hike, but you are talking about 171 years of inflation and a much faster delivery turnaround time today!

Automotive Industry Speeds Up the Mail

Transporting the mail has been a constant evolution since the creation of United States Postal Service in 1775. Obviously, in 1775 letters weren’t driven down streets in the white mail trucks that we have all become accustomed to seeing pull up to our mailbox each day. There were actually 124 years from the creation of the U.S. postal service to the first time an automobile was tested to replace horse and buggy delivery. When you think about delivery in “rain or snow, or dark of night” it means a lot more when you imagine all of the letters being delivered by horse and buggy! In 1899, the first motorized car was tested for mail delievry, but officially, 1906 is when the first cars were used to deliver the mail. Today, USPS has the largest fleet of vehicles in the world, this, of course, includes the airplanes that make “Next Day Air” possible.

When you run a business that sends and receives most of its items through the mail, you realize how vital USPS is to your daily operations. At MyAirbags, our day really kicks off when our local post office brings us packages that are filled with Airbag Modules, Displays, ABS Modules and more that need to be repaired. After that, our IPC certified team gets to work on repairing the systems in order to have them mailed back out within 24 hours. The United States Postal Service is a huge part of the processes that make our business successful, which is why today; we are thanking all the postal workers that help make our lives easier!